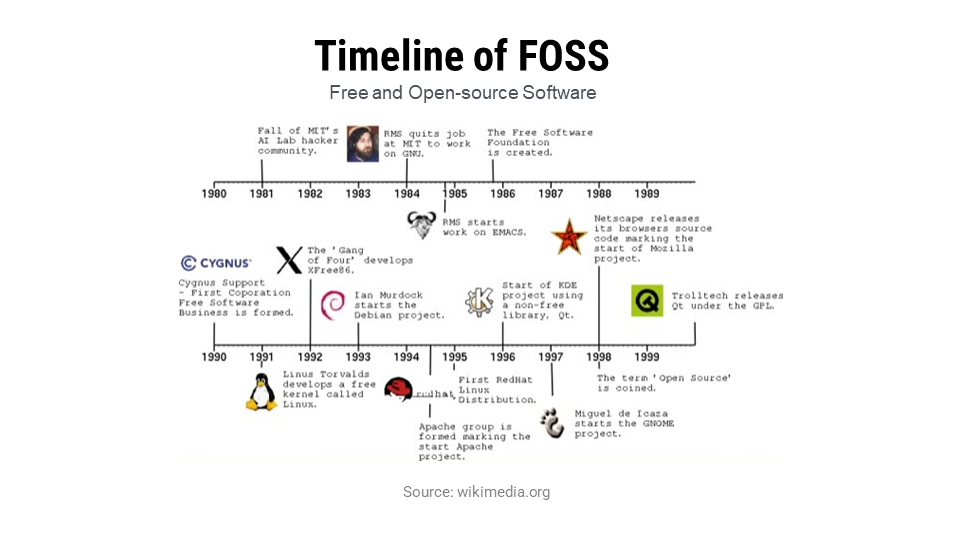 Unfortunately, access to data in the construction industry has not become more accessible or cheaper. BIM data created during design in CAD software cannot be used in other 4D-7D solutions today without the use of expensive CAD software, complex plug-ins, incomplete APIs or the “not quite interoperable” IFC format.

The solution to the problems of proprietariness and closedness are projects with access to source code. More successful industries have already made the switch to Open Source solutions. Open initiatives and an Open Source community will give us a chance to have data in a transparent and understandable way in the construction industry.

Open Source – a ray of light in the darkness of monopolies

Open Source emerged in the 1980s, when a large number of personal computers became available on the home hardware market, which became smaller and cheaper each year, giving even small commercial companies and individuals the opportunity to explore the new world of electronic data.

At the same time, there were more and more enthusiasts or employees of commercial companies who wrote software. And there was a growing question as to whether programmes should be licensed, which led to software being treated as a literary work in 1974.

Competition and development of software licences began, and legal prohibitions on third-party modification of products emerged.

“Free software came along with computers. Software was all free at that time – everyone just shared with each other. It was only in the late ’70s and early ’80s when people started shutting down their software and saying, “No, you’ll never see the source code, even if it’s important for your needs. Perhaps it is Microsoft to blame – they were the pioneers of the proprietary software model»

head of the Debian project.

Many technology leaders in the 1990s saw open source as a poison that would destroy all principles of economic well-being. SAP president Shai Agassi, at a Churchill Club meeting in Silicon Valley, called open source systems a brake on progress.

“Socialism in intellectual property is the worst thing that could happen. Open Source is not innovative and may even undermine the development of other applications. After all, copyright and patent rights exist to protect intellectual property and create a “society that depends on creative achievement”

One of the main opponents of the Open Source movement was Microsoft, which fought the open source Linux operating system until the mid-2000s. Microsoft co-founder Bill Gates called the GPL (GNU General Public License) a good code-eating “Pac-Man-like” toy. “People who think everyone should have the right to program, to write sophisticated software freely, are communists,” Bill Gates argued in the 1990s.

Steve Ballmer, who succeeded Bill Gates as CEO of Microsoft, also compared Linux to communism and called the Open Source Linux project a “cancer” of the industry.

“Linux is not a public domain. Linux is a cancer that devours everything it touches in terms of intellectual property. That’s how its license works”.

But the rise in popularity of Linux, Android, Ubuntu, the developer community and customer desires forced the corporation to change its policy. In 20 years, Microsoft has gone from being an opponent of Open Source to one of the biggest and most powerful supporters of the open source principle.

Microsoft “forced” to admit the mistake of being biased towards free software, bought GitHub, brought .NET Core into Open Source and is now actively involved in developing open source projects (e.g. Linux) and even Steve Ballmer now confesses his love for Linux.

Today’s Microsoft president, Brad Smith, has admitted that the company’s past stance on open source software was fundamentally flawed: “Microsoft historically went down the wrong path when Open Source blew up the industry at the beginning of the century. I can say that about myself as well”. Smith pointed out that Microsoft is now the largest provider of Open Source projects in the world when “it comes to business”.

Open source can help bridge the digital divide between major technology companies, major universities and countries around the world. In a company blog post in January, Microsoft OpenSource chief Sarah Novotny explained why it is hardly possible for any company to do without using open-source software.

“A few years ago, if you wanted to bring together several large technology companies to work together on a software initiative, establish open standards or agree on policies, it would often take months of negotiations, meetings, debates, conversations with lawyers and advocates. Open source has changed this completely: it has become an accepted model of collaboration between companies.

RedHat research shows that the share of proprietary software in the corporate segment has been decreasing at a serious pace for several years now. According to 86% of RedHat’s respondents, the most innovative companies in their fields use open source software.

International IT market research institute Gartner predicts that by 2022 the amount of proprietary software in use will fall to 32% and about 70% of enterprise software will be based on open source.

According to a survey of international companies, 95 per cent of IT managers said that using freely licensed software was an important part of their IT strategy. Open Source steals the smartest, most innovative and passionate professionals from all sectors of the economy.

Applied Open Source in sectors of the economy

Today, Open Source solutions and open data libraries for machine learning rule the technology world in most industries. Open-source ideas have long taken hold in the banking industry, where most processes are automated through smart contracts, built on open-source principles. And transparent blockchain-based systems completely replace the competencies of hundreds of thousands of individual employees in banking institutions and the functions of unstable currencies in some countries.

“I cannot predict exactly what is going to happen with the world economy, but I am convinced that it will change beyond recognition. Will there be a major bank in the country? Sadly, I cannot give a 100% answer to that question either. The question is following: which of the current businesses will remain in existence in the first place. In 10 years’ time, I’m afraid there won’t be any banks and I won’t have anywhere to go to work.”

In the mechanical engineering industry, Hardware is actively giving way to Software solutions, which are mainly built on Unix, Linux and Open Source solutions. Tesla publishes its patents but the carmakers’ main successes are related to autonomous driving, which is built almost entirely on Open Source applications and libraries.

“When I started my first company, Zip2, I thought patents were good and worked hard to get them. And they may have been good a long time ago, but these days they too often serve simply to stifle progress, consolidate the position of giant corporations and enrich lawyers rather than real inventors. After Zip2, I realised that getting a patent really just meant buying a lottery ticket for a lawsuit, so I started avoiding them whenever possible.”

Without the creation of a community, Open Source projects would not have the resources to take the project to the end user, so that eventually third-party developers and enthusiasts would become interested in the project. The community is a key factor in the success of Open Source projects, making it possible to significantly reduce project management, development and maintenance costs.

In the world of construction, we cannot improve productivity without using Open Source principles and building Open Source communities. In the field of construction services and applications, the first projects with access to source code were solutions from OpenCascade, FreeCAD, ODA and BlenderBIM, which solve today the problem of available tools for creating 3D data.

The availability of transparent data from older proprietary products or new Open Source solutions will make it possible to collect data from previous projects in a uniform format, finally giving a boost to the topic of automation: Big Data and Machine Learning in construction (which are not being developed due to the lack of open data). Big corporations today have already obtained machine learning technology, created relevant libraries by collecting customer data through cloud services. Large corporations will not give ordinary users access to such libraries for geometry recognition or for creating automatic classifiers, for example.

The open communities in the construction industry will create their own tools and their own open data libraries, which will be of higher quality than the libraries of the Legacy developers from the big corporations. Such open libraries and new open CAD solutions, created through the efforts of the Open Source community, will automate design and optimise most of the legacy 4D-7D business processes in the construction industry.

Proprietary storage formats are arguably the most pernicious invention of our time and a major obstacle to our ability to overcome the challenges of new technologies in the construction industry.

The problems with data transparency in the construction industry are related to the lack of a single user-friendly format for 3D information modeling, which will be unambiguously interpreted in mainstream 4D-7D systems and in which model packaging and unpacking operations will not lead to loss of information.  Unfortunately, existing solutions in the form of BIM methodology or information transfer via IFC-format are not suitable for the purpose of interoperable data handling, as in these systems there is a great dependence of data quality on the owners of the CAD solutions and on the buildingSMART organisation.

Of the entire ISO 19 650 family, which is dedicated completely to BIM, only part four, which deals with data exchange in construction, is still under development.

The construction industry needs an exchange tool – a converter, not based on trust, but on open source, which would allow any participants to transfer data directly, without an intermediary. This is partly solved by using the IFC format, but the need for a ‘trusted person’ for quality control and the lack of transparency in the design of the format (see section on ‘IFC opacity’) deprives this approach of its major advantages.

The problem of transparent data transmission can be solved by using an open format and an open source converter that is independent of the data provider.

No products in the cart.

Decide which cookies you want to allow.You can change these settings at any time. However, this can result in some functions no longer being available. For information on deleting the cookies, please consult your browser’s help function.Learn more about the cookies we use.

With the slider, you can enable or disable different types of cookies: